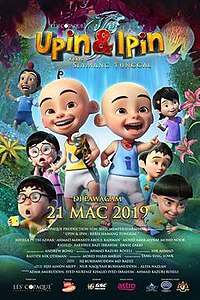 Upin & Ipin: The Lone Gibbon Kris is a 2019 Malaysian computer-animated adventure film. The film follows the adventure of the twins and their friends in the fantastical kingdom of Inderaloka, where they have to save the kingdom from the evil king. It is the third feature film based on the animated TV series Upin & Ipin by Les' Copaque Production, after Geng: The Adventure Begins in 2009 and Upin & Ipin: Jeng Jeng Jeng! in 2016. With a budget of RM20 million, it is the most expensive Malaysian film ever made.