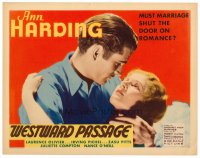 Westward Passage is a 1932 American pre-Code drama film directed by Robert Milton and starring Ann Harding, Laurence Olivier, ZaSu Pitts and Irving Pichel. The screenplay concerns a woman who falls in love and marries, but soon discovers how unpleasant her new husband is. The film marked Olivier's second major role in the United States. It was not a commercial or critical success, and Olivier did not make another film in America until 1939 when he starred in Wuthering Heights. The film recorded a loss of $250,000.

Newlyweds Olivia and Nick Allen struggle to keep their relationship afloat through personal disagreements. Nick lacks recognition for his works as an independent writer; hence, he is unable to support Olivia and their young daughter. These difficulties eventually lead to a divorce, the last they will see each other for many years. Six years after their divorce, Olivia lives a stable life with her husband, Harry Ottendorf, and her daughter, Little Olivia. Meanwhile, Nick has made a successful and rewarding career in writing but still yearns to be with Olivia. When the two board the same ship returning from Europe to the United States, Olivia is torn between the love of her kindly husband and the attempt by her former husband to rekindle the passion they once shared.