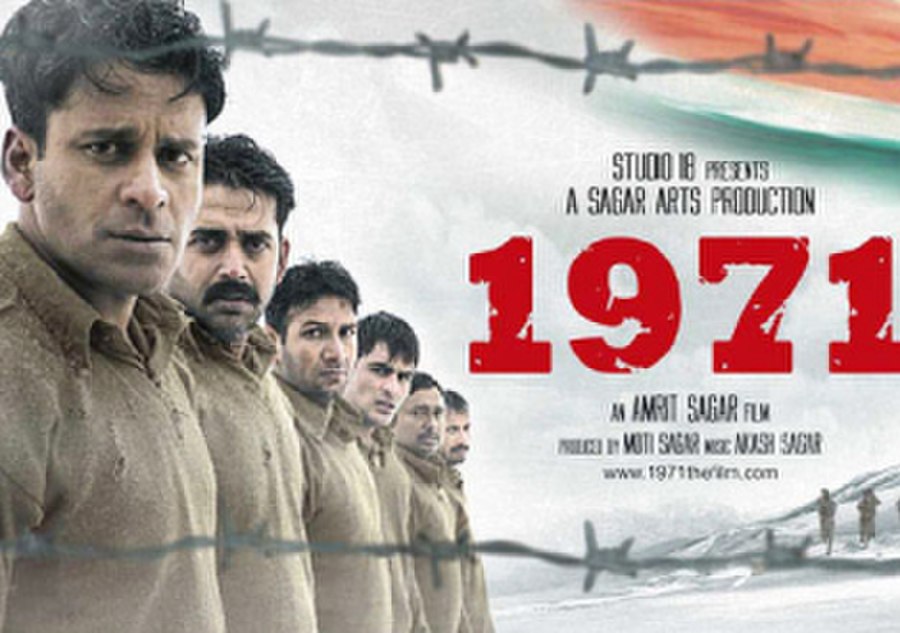 1971 is a 2007 Indian Hindi-language war drama film directed by Amrit Sagar, and written by Piyush Mishra and Amrit Sagar, based on a true story of prisoners of war after the Indo-Pakistani War of 1971. The film features an ensemble cast of Manoj Bajpayee, Ravi Kishan, Piyush Mishra, Deepak Dobriyal and others. At the 55th National Film Awards, it won the National Film Award for Best Feature Film in Hindi The film is an account of the escape of six soldiers of the Indian Army taken as prisoners of war by Pakistan Army, during the Indo-Pakistani War of 1971 that was preceded by rebellion of East Pakistan(now Bangladesh) to separate itself from West Pakistan(now Pakistan) and create a new country.

The story takes place in Pakistan in 1977, six years after the 1971 Bangladesh Liberation War. Major Suraj Singh (Manoj Bajpayee), Captain Kabir (Kumud Mishra), Captain Jacob (Ravi Kishan) and Pali discussing the camp in general. The next morning, an army truck is driving towards the camp. This truck has a few more Indian POWs. This group includes Flight Lieutenant Ram (Manav Kaul), Flight Lieutenant Gurtu (Deepak Dobriyal) and Colonel Puri. They steal a guard's wallet and get a Pakistani army ID card on the way. The POWs realize that they are in a place less than 200km from the Indo-Pak border. (The place, it is revealed later, is Chaklala.) When Colonel Puri is told of this and the idea of an escape is put forward, he overrules it. His reasons are that perhaps they will finally be repatriated and that a failed attempt could result in all of them being killed. Colonel Shakoor arrives at the Chaklala camp; he informs Colonel Puri and Major Singh that all the POWs will be repatriated. Ahmed steals a newspaper and finds they are being and lied to and plan an escape. As a celebration for 14th of August, a Ghazal singer is invited to the camp. The soldiers also manage some fake IDs and Pakistani uniforms. Due to some confusion, Ahmed dies to blow up the electrical room during the escape attempt. The rest escape with the singer. Jacob shoots himself unable to take the pain after he is injured during their stay at a hideout. Ram kills many of the search party by exploding a grenade on himself, helping his comrades to evade capture. Kabir dies in his sleep as they reach very close to the Indian border. Suraj is shot and killed by Pakistanis as he is about to cross to the India side.