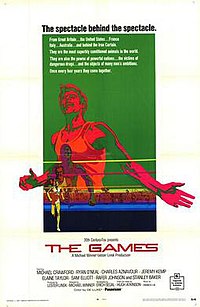 The Games is a 1970 British sports drama film directed by Michael Winner. It is based on the 1968 Hugh Atkinson novel and adapted to the screen by Erich Segal. The plot concerned four marathon competitors at a fictitious Olympic Games in Rome, played by Michael Crawford, Ryan O'Neal, Charles Aznavour and Athol Compton. Elton John recorded one song ("From Denver To L.A.") for the soundtrack.