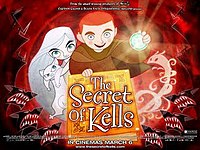 The Secret of Kells is a 2009 French-Belgian-Irish animated fantasy film about the making of the Book of Kells, an illuminated manuscript from the 9th Century. The film was animated by Cartoon Saloon and premiered on 8 February 2009 at the 59th Berlin International Film Festival. It went into wide release in Belgium and France on 11 February, and Ireland on 3 March. It was nominated for the Academy Award for Best Animated Feature but it lost to Pixar’s Up.

Set in 9th century Ireland, during the age of Viking expansion, the film's protagonist is Brendan, a curious and brave boy living in the tightly knit Abbey of Kells under the care of his stern uncle, Abbot Cellach, who is obsessed with building a wall around the Abbey to prevent Viking attacks.