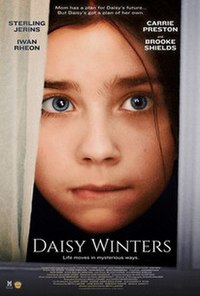 Daisy Winters is a 2017 American independent drama film written and directed by Beth LaMure. The film follows an 11-year-old girl named Daisy Winters, played by Sterling Jerins. Daisy's mother Sandy (Brooke Shields) has been losing a fight with cancer for years. This has made Daisy obsessed with everything to do with death.

Set in the 1990s, Daisy Winters is the daughter of Sandy Winters who has been battling cancer for the past 5 years. Daisy's Aunt Margaret is seen exiting Sandy's home hitting her own daughter across the face hard. Inside the house, in a heated argument between Daisy and her mother it is revealed that Daisy has not had contact with her father for years due to her mother breaking off contact with him because of a bad divorce. In this same argument it is arranged that when Sandy dies, Daisy is to live with her Aunt Margaret who is against her sister's relaxed mothering methods in comparison to her harsh and conservative approach.