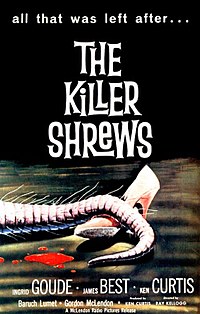 Captain Thorne Sherman (James Best) and first mate Rook Griswold ("Judge" Henry Dupree) deliver supplies by boat to a group on a remote island. The group, consisting of scientist Marlowe Cragis (Baruch Lumet), his research assistant Radford Baines (Gordon McLendon), the scientist's daughter Ann (Ingrid Goude), her former fiancée Jerry Farrel (Ken Curtis), and a servant Mario (Alfred DeSoto), welcome the captain and his first mate. Before the two visitors can get too comfortable though the islanders, to their surprise, begin to insist that the ship leave immediately and take Anna with them, even though a hurricane is fast approaching the island. Thorne however insists that the storm will be too severe for them to leave that night and so instead goes with the researchers to their compound, while Griswold stays with the boat, saying that he will come ashore later.