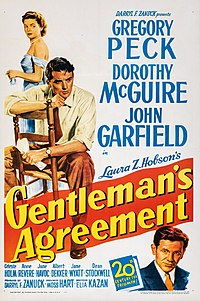 Gentleman's Agreement is a 1947 American drama film based on Laura Z. Hobson's best-selling 1947 novel of the same name. It concerns a journalist (played by Gregory Peck) who poses as a Jew to research an exposé on the widespread distrust and dislike of Jews in New York City and the affluent communities of New Canaan, Connecticut and Darien, Connecticut. It was nominated for eight Oscars and won three: Best Picture, Best Supporting Actress (Celeste Holm), and Best Director (Elia Kazan).

Philip Schuyler Green (Gregory Peck) is a widowed journalist who has just moved to New York City with his son Tommy (Dean Stockwell) and mother (Anne Revere). Green meets with magazine publisher John Minify (Albert Dekker), who asks Green, a Gentile, to write an article on anti-Semitism ("Some people don't like other people just because they're Jews"). He is not very enthusiastic at first, but after initially struggling with how to approach the topic in a fresh way, Green is inspired to adopt a Jewish identity ("Phil Greenberg") and writes about his first-hand experiences.