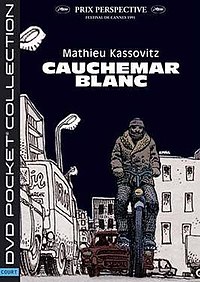 Cauchemar Blanc (English: White Nightmare) is a 1991 short film by Matthieu Kassovitz, based on the comic written for the screen by Moebius.

One winter's night in France, four racists, J.P., Berthon, Barjout, and René, set out to assault a local Arab man. The four follow him to a vacant parking lot outside of an apartment building, but the car they are in suddenly starts smoking, causing them to crash into a phone booth. Barjout is knocked unconscious, but the others are unharmed. As the remaining three are about to attack the quite fearless (albeit defenseless) Arab, a woman in the building threatens to call the police.