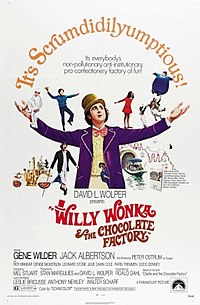 Willy Wonka & the Chocolate Factory is a 1971 American musical fantasy film directed by Mel Stuart and starring Gene Wilder as Willy Wonka. It is an adaptation of the 1964 novel Charlie and the Chocolate Factory by Roald Dahl. The film tells the story of a poor child named Charlie Bucket who, after finding a Golden Ticket in a chocolate bar, visits Willy Wonka's chocolate factory along with four other children from around the world.

In a small town, Charlie Bucket, a poor paperboy, watches children visit a candy shop. Walking home, he passes Willy Wonka's chocolate factory. A mysterious tinker recites the first lines of William Allingham's poem "The Fairies" and tells Charlie that "nobody ever goes in, and nobody ever comes out." Charlie rushes home to his widowed mother and bedridden grandparents. That night, Charlie tells his Grandpa Joe what the tinker said, and Joe reveals that Wonka locked the factory because other candy makers, including his rival Arthur Slugworth, sent in spies to steal his recipes. Wonka shut down the factory but resumed selling candy after three years. The origin of Wonka's labor force is unknown.