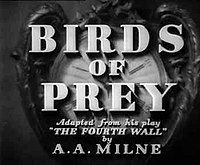 Birds of Prey, also known in the United States as The Perfect Alibi, is a 1930 British mystery film produced and directed by Basil Dean, from a screenplay he co-wrote with A.A. Milne from Milne's play which was known as The Perfect Alibi in the United States and The Fourth Wall in the United Kingdom. The film stars Dorothy Boyd, Robert Loraine, Warwick Ward, C. Aubrey Smith, Frank Lawton, and Robert Loraine, and was produced at Beaconsfield Studios by Associated Talking Pictures.