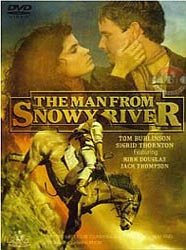 When Jim Craig and his father Henry are discussing their finances, a herd of wild horses called the Brumby mob passes by, and Henry wants to shoot the black stallion leader, but Jim convinces his father to capture and sell them. The next morning the mob reappears and Henry is accidentally killed. Before Jim can inherit the station, a group of mountain men tell him that he must first earn the right – and to do so he must go to the lowlands and work. Jim meets an old friend called Spur, a one-legged miner. Jim then gets a job on a station owned by Harrison, Spur's brother, on a recommendation by Harrison's friend. Meanwhile, Clancy appears at Spur's mine and the two discuss their pasts and futures. Clancy goes to Harrison's station to lead a cattle muster. At dinner, Harrison tells Clancy that "he has no brother" when referring to Spur.