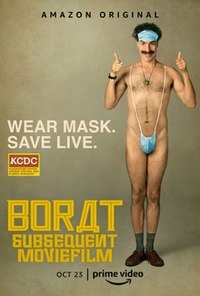 Borat Subsequent Moviefilm: Delivery of Prodigious Bribe to American Regime for Make Benefit Once Glorious Nation of Kazakhstan is a 2020 American mockumentary comedy film directed by Jason Woliner in his feature directorial debut. The film stars Sacha BaronCohen as the fictional Kazakh journalist and television personality Borat Sagdiyev, and Maria Bakalova as his daughter Tutar, who is to be offered as a bride to Vice President Mike Pence during the COVID-19 pandemic and the 2020 presidential election. It is a sequel to 2006's Borat: Cultural Learnings of America for Make Benefit Glorious Nation of Kazakhstan.

Borat humiliates Kazakhstan, causing journalist Borat Sagdiyev to be imprisoned in a gulag for life. Fourteen years later, the country's Premier, Nursultan Nazarbayev, releases him, with a mission to deliver Kazakh Minister of Culture Johnny the Monkey to President Donald Trump in an attempt to redeem the nation. Unable to get close to Trump after defecating in the landscaping of Trump International Hotel and Tower in the previous film, Borat opts to give the monkey to Vice President Mike Pence. Before he leaves, he discovers his arch nemesis neighbor has stolen his family and home, and that he has a fifteen-year-old daughter, Tutar, who lives in his barn.