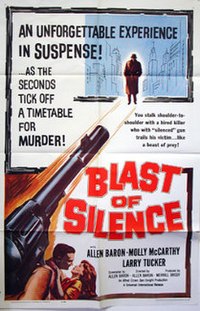 Blast of Silence is a 1961 American neo-noir film written, directed by, and starring Allen Baron. The film also stars Molly McCarthy, Larry Tucker, and Peter Clume. It was produced by Merrill Brody, who was also the cinematographer.

Frankie Bono, a mentally disturbed hitman from Cleveland, comes back to his hometown in New York City during Christmas week to kill a middle-management mobster, Troiano. The assassination will be risky, with Frankie being warned by a fellow enforcer that should he be spotted before the hit is performed, the contract will be reneged.