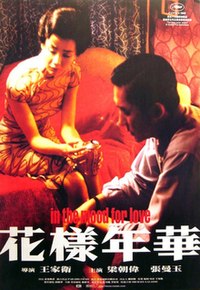 In the Mood for Love is a 2000 romantic drama film written, produced and directed by Wong Kar-wai. A co-production between Hong Kong and France, it portrays a man (Tony Leung) and a woman (Maggie Cheung) whose spouses have an affair together and who slowly develop feelings for each other. It forms the second part of an informal trilogy, alongside Days of Being Wild and 2046.

The following intertitle begins the film: