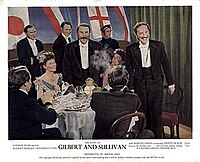 The Story of Gilbert and Sullivan 1953

The Story of Gilbert and Sullivan is a 1953 British technicolor film that dramatises the story of the collaboration between W. S. Gilbert and Arthur Sullivan. Gilbert and Sullivan wrote 14 comic operas, later referred to as the Savoy Operas, which became the most popular series of musical entertainments of the Victorian era and are still popular today.

The young composer Arthur Sullivan is encouraged by his friends and fiancée, Grace, to pursue the creation of "serious" works, such as his cantata The Prodigal Son, but he is pleased by the acclaim that he receives for the music to the short comic opera Trial by Jury, a collaboration with dramatist W. S. Gilbert. Grace leaves him, telling him that he is wasting his musical gifts on triviality, foreshadowing criticism from the musical establishment that will follow Sullivan for the rest of his career.