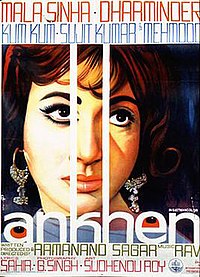 Ankhen (The Eyes) is a 1968 Hindi spy thriller produced and directed by Ramanand Sagar. After the surprise big hit of Farz as a spy thriller, Sagar came out with a bigger budget film in the same genre, shot in many international locations. This was the first hindi film shot in Beirut.

Shortly after independence, India faces terrorists attacks in Assam, resulting in many deaths and casualties. A group of concerned citizens, who are not connected with the government, decide to do something to stop this carnage. While Salim is already at work in Beirut, his cover is blown and he is shot dead. Now Sunil Mehra must travel to Beirut and take over. Once there, he meets a former flame, Meenakshi Mehta, and a female admirer by the name of Zenab.