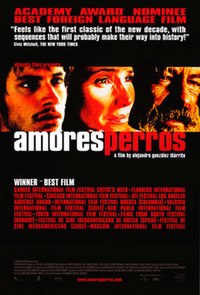 Amores perros is a 2000 Mexican crime thriller dark comedy-drama film directed by Alejandro González Iñárritu and written by Guillermo Arriaga. Amores perros is the first installment in González Iñárritu's "Trilogy of Death", succeeded by 21 Grams and Babel. It makes use of the multi-narrative hyperlink cinema style and features an ensemble cast. The film is constructed as a triptych: it contains three distinct stories connected by a car accident in Mexico City. The stories centre on a teenager in the slums who gets involved in dogfighting; a model who seriously injures her leg; and a mysterious hitman. The stories are linked in various ways, including the presence of dogs in each of them.

The film is constructed from three distinct stories linked by a car accident that brings the characters briefly together.