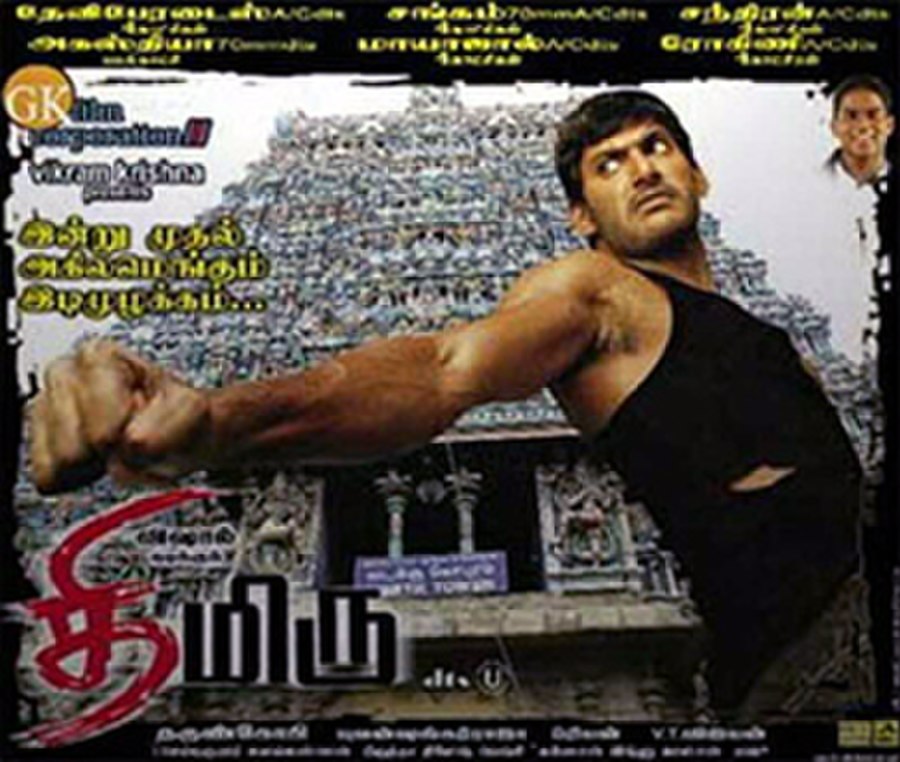 Thimiru is a 2006 Indian Tamil-language action film written and directed by debutant Tarun Gopi. It stars Vishal, Reema Sen and Sriya Reddy in lead and former football player I. M. Vijayan, Manoj K. Jayan and Vadivelu in supporting roles, whilst Kiran Rathod appears in an item number. The film's score and soundtrack are composed by Yuvan Shankar Raja. Produced by Vikram Krishna, under the banner of G K Film Corporation, it was released on 4 August 2006. Thimiru became highly successful at the box office and one of the top-grossing Tamil films in 2006. The film was also praised for Vadivelu's comedy.

The movie is about Ganesh (Vishal), who comes from Madurai to continue his medical course in Chennai. A group of baddies is in pursuit. Meanwhile, Srimathy (Reema Sen), Ganesh's professor's daughter, wants to meet Ganesh and thank him for helping her escape from the clutches of some vile elements. When Ganesh and Srimathy meet, they are surprised, for they know each other. The gangsters, on spotting both, vow to kill them. The film goes into a flashback. Eswari (Sriya Reddy) is a shrewish, arrogant 'kattapanchayata' woman. She lends money at usurious rates and goes after families who fail to repay. Srimathy's family falls afoul of Eswari. Ganesh helps Srimathy's folks. Eswari falls for Ganesh's bravery and boldness and wants him to marry her, but he does not. She ends up kidnapping Ganesh's parents and threatening Ganesh to come to them and marry her. However, Ganesh thwarts all her plans. Eventually, in a freak mishap, Eswari meets her fate. Mistaking Ganesh to be the reason for their sister's death, Eswari's brothers Periya Karuppu (Manoj K. Jayan) and Chinna Karuppu (I. M. Vijayan) resolve to kill him. Ganesh, who reaches Chennai for safety, is eventually forced to go back to his old ways to fight the baddies and restore order.