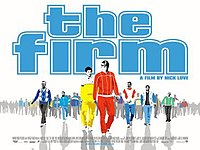 The Firm is a British 2009 drama film based around football hooliganism written and directed by Nick Love. It is a remake of the original 1989 version.

Bex is the leader of the West Ham United football firm, that travels up and down the country to fight other firms. Dom is a normal young lad who hangs around with his mates, and one night they go to a nightclub, where his friend Tel walks into Bex. After the two share words, Bex headbutts Tel in the face. The morning after, Tel tells Dom that Bex is after them. The two then go to the local pub, the Lord Nelson, where the firm hangs out. There, Dom apologises for the two of them. Bex compliments Dom's courage, saying that he has a lot of guts to walk in and face him. Dom later finds out where Bex works and goes to visit him. They become acquaintances, visiting a sports shop where Bex purchases a pair of Adidas Munchen trainers. He then asks Dom if he wants to play in his football team. Dom accepts. Dom asks his Dad for money to buy the same pair of trainers.