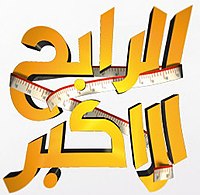 The Biggest Winner is an Arabic reality television show that began broadcasting on MBC 1 in 2006. Filming took place in Lebanon. The show is an adaptation of the American reality television show The Biggest Loser. The show features a host, personal trainers, and a dietitian who help the contestants lose weight. As of December 2009, MBC 1 has presented four seasons of the show with a total of 58 contestants from 14 different Arabic countries.

The basic premise of the show is that overweight contestants are competing to win cash (and other prizes) by losing the highest percentage of their starting body weight.