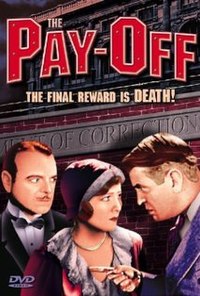 The Pay-Off is a 1930 American pre-Code crime drama film directed by Lowell Sherman, who also starred in the film along with Marian Nixon and Hugh Trevor. The screenplay was adapted by Jane Murfin, along with Samuel Shipman and John B. Hymer, based on Shipman and Hymer's 1927 play, Crime.

Gene Fenmore is a suave gentleman, safely ensconced in the upper crust of society. Unbeknownst to his society acquaintances, he is also the leader of the largest mob in the city. But it is a mob with scruples, thanks to Fenmore, and they only prey on dishonest businessmen, and never shoot or kill anyone. However, there is a power struggle developing between Fenmore and his number two man, Rocky, who disagrees with the moral constraints put on the gang by Fenmore. The tension between the two men is exacerbated by the fact Rocky has taken Fenmore's girlfriend, Dot away from him.