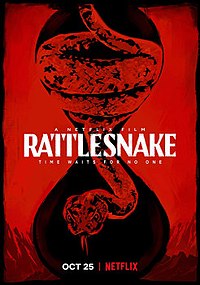 Rattlesnake is a crime drama mystery film written and directed by Zak Hilditch and starring Carmen Ejogo, Theo Rossi and Emma Greenwell. It was released on Netflix on October 25, 2019.

Katrina's daughter, Clara has been bitten by a rattlesnake where Katrina meets a mysterious woman in a trailer who says she'll help. The bite appears to have vanished and when Katrina takes Clara to the hospital, it seems that everything is fine.