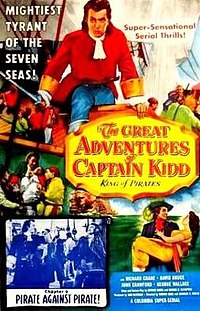 The Great Adventures of Captain Kidd 1953

The Great Adventures of Captain Kidd (1953) was the 52nd serial released by Columbia Pictures. It is based in the historical figure of Captain William Kidd.

In 1697, agents Richard Dale and Alan Duncan are sent on an undercover mission by the British Fleet to find and gather information on the notorious pirate, Captain William Kidd. Dale and Duncan soon join Kidd's crew and discover, to their surprise, that the Captain is far different than they had expected.