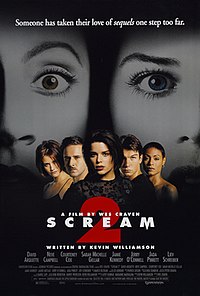 Scream 2 is a 1997 American slasher film directed by Wes Craven and written by Kevin Williamson. It stars David Arquette, Neve Campbell, Courteney Cox, Sarah Michelle Gellar, Jamie Kennedy, Laurie Metcalf, Jerry O'Connell, Elise Neal, Timothy Olyphant, Jada Pinkett and Liev Schreiber. The film was released on December 12, 1997, less than a year after the first, by Dimension Films, as the second installment in the Scream film series. It was followed by three sequels, Scream 3 (2000), Scream 4 (2011), and an untitled fifth film, which began filming in September 2020. Scream 2 takes place one year after the first film and again follows the character of Sidney Prescott (Campbell), and other Woodsboro survivors, at the fictional Windsor College in Ohio, who becomes the target of a copycat killer using the guise of Ghostface.

Windsor College seniors Maureen Evans and Phil Stevens attend a sneak preview of Stab, a film based on the events of the first film. During the movie, Phil uses the restroom and is killed by Ghostface. Ghostface enters to the screening and sits beside Maureen, who thinks it's Phil trying to scare her before finding blood on his cloak. Ghostface fatally stabs her, which the audience mistakes for a publicity stunt until Maureen falls dead in front of the movie screen.