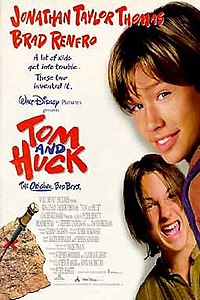 Tom and Huck is a 1995 American adventure comedy-drama film based on Mark Twain's 1876 novel The Adventures of Tom Sawyer, and starring Jonathan Taylor Thomas, Brad Renfro, Mike McShane, Eric Schweig and Amy Wright. The film was directed by Peter Hewitt and produced/co-written by Stephen Sommers (who also worked on Disney's adaptation of Twain's 1884 novel, 1993's The Adventures of Huck Finn). The movie was released in North America on December 22, 1995.

One dark stormy night, Injun Joe goes to meet Doctor Jonas Robinson for some shady business. Tom Sawyer is then seen running away from home. He and his friends ride down the Mississippi River on a raft, but hit a sharp rock, which throws Tom into the water. His friends find him washed up on the shore, and Tom finds it was Huck Finn who carried him to safety. Huck learns of an unusual way to remove warts - by taking a dead cat to the graveyard at night. There they witness Injun Joe and Muff Potter, the town drunk, digging up the grave of Vic "One-Eyed" Murrell for Doctor Robinson. A treasure map is discovered and Doc assaults Muff and Injun Joe in an attempt to take it for himself. Doc manages to knock out Muff, and Injun Joe fights back by fatally stabbing Doc with Muff's knife.