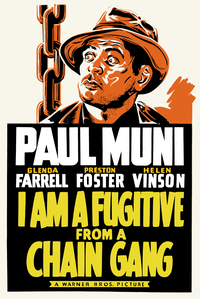 I Am a Fugitive from a Chain Gang is a 1932 American pre-Code crime-drama film directed by Mervyn LeRoy and starring Paul Muni as a wrongfully convicted man on a chain gang who escapes to Chicago. It was released on November 10, 1932. The film received positive reviews and three Academy Award nominations.

American sergeant James Allen returns to civilian life after World War I. He has served with distinction, earning a medal from Allied governments for his bravery, but his war experience has made him restless. His mother and minister brother feel Allen should be grateful for a tedious office clerk job. When he announces that he wants to enter the construction industry and improve society as an engineer, his brother reacts with outrage, but his mother regretfully accepts his ambitions. He leaves home to find work, but unskilled labor is plentiful, and it is hard for him to find a job. Allen sinks slowly into poverty. In an unnamed Southern state (the events upon which the film was based took place in Georgia), Allen visits a diner with an acquaintance, who forces him at gunpoint to participate in a robbery. The police arrive and shoot and kill his friend. Allen panics and attempts to flee but is caught immediately.