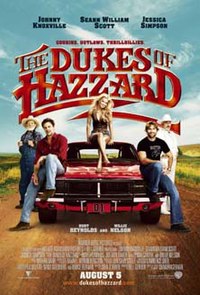 The Dukes of Hazzard is a 2005 American buddy comedy road film loosely based on the television series, The Dukes of Hazzard. The film was directed by Jay Chandrasekhar and released on August 5, 2005, by Warner Bros. Pictures. As in the television series, the film depicts the adventures of cousins Bo, Luke, and Daisy, and their Uncle Jesse, as they outfox crooked Hazzard County Commissioner Boss Hogg and Sheriff Rosco P. Coltrane.

Cousins Bo, Luke, and Daisy Duke run a moonshine business for their Uncle Jesse in Hazzard County, Georgia. The cousins' primary mode of transportation is an orange 1969 Dodge Charger that the boys affectionately refer to as the "General Lee". Along the way, the family is tormented by corrupt Hazzard County Commissioner Jefferson Davis Hogg, widely known as "Boss Hogg", and his willing but dimwitted henchman, Sheriff Rosco P. Coltrane.