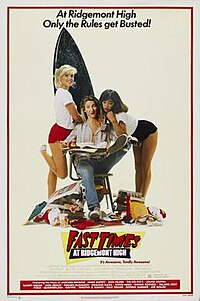 Fast Times at Ridgemont High is a 1982 American coming-of-age comedy-drama film directed by Amy Heckerling and written by Cameron Crowe adapted from his 1981 book of the same title. Crowe went undercover at Clairemont High School in San Diego and wrote about his experiences.

Brad Hamilton is a popular senior at Ridgemont High School and looks forward to his final year of school. He has a job at All-American Burger, almost has his 1960 Buick LeSabre paid off, and plans to break up with his girlfriend Lisa so he can be completely eligible during the year. Brad, however, is fired for threatening an obnoxious customer. While he tries to tell Lisa how much he needs her, she informs Brad that she wants to break up with him to date other guys. Brad gets a job at Captain Hook Fish & Chips, but quits in humiliation when a beautiful older woman laughs at his wearing a pirate costume while making a food delivery.