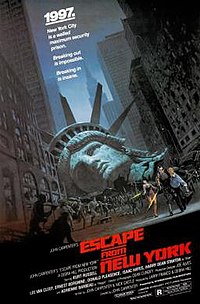 In a dystopian 1988, amidst total war against an alliance of China and the Soviet Union, the United States government has turned Manhattan into a giant maximum-security prison to deal with a 400% increase in crime. A wall surrounds the island, bridges have been mined, rivers are patrolled by helicopters and all prisoners unlucky to be alive are sentenced to life terms in Manhattan.