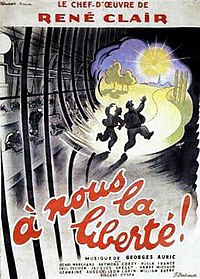 À nous la liberté (English: Freedom for Us) is a 1931 French film directed by René Clair. With a score by Georges Auric, the film has more music than any of Clair's early works.

The film opens with an image of a wooden toy horse. Gradually we observe that this is an assembly line in a prison, staffed by prisoners. They sing (La liberté, c'est pour les heureux = "Freedom is for the happy") as they work. Close-ups of two prisoners (Louis and Émile, the film's main protagonists) indicate they've taken a work tool. The prisoner next to Louis occasionally looks on, looking somewhat bored. After dinner everyone goes back to their cell. After feigning sleep during a guard's nightly rounds, Louis and Émile sing the title song as they resume a project of sawing off the prison window. Émile cuts himself, and Louis kindly mends the wound with a handkerchief. The window breaks free and they attempt to escape. Louis is able to get over the retaining wall, but Émile is not successful. Louis escapes, accidentally knocks someone off a bicycle, and rides off on the bicycle. Meanwhile, we hear a chorus suggesting he's about to be captured (Ce sera bientôt fini = "It'll soon be over"). Louis heads into a village emblazoned with the words "Finishing Line" - the cyclist he knocked over was in a bicycle race, and Louis has won first prize.