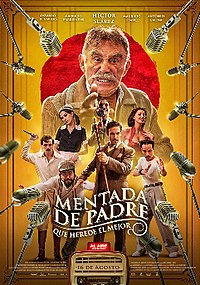 Mentada de padre is a 2019 Mexican comedy film directed by Mark Alazraki and Fernando Rovzar, based from a screenplay by William Sutcliffe. The film is set in Mexico in 1942. And it revolves around the four children of Don Lauro Márquez Castillo (Héctor Suárez), a man who on his deathbed, asks his children to show who deserves to bear the last name Márquez Castillo. It premiered in Mexico on 16 August 2019.