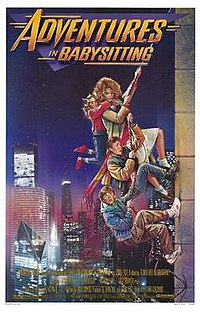 Adventures in Babysitting (also known as A Night on the Town in certain countries) is a 1987 American teen comedy film written by David Simkins and directed by Chris Columbus in his directorial debut. It stars Elisabeth Shue, Keith Coogan, Anthony Rapp, and Maia Brewton, and features cameos by blues singer/guitarist Albert Collins and singer-songwriter Southside Johnny Lyon.

After her boyfriend Mike cancels their anniversary date, seventeen-year-old Chris Parker invites her friend Brenda over to her Oak Park, Illinois, house to cheer her up, but is convinced by her mother to babysit the Andersons' daughter, eight-year-old Sarah, while they attend a party in downtown Chicago. Sarah's fifteen-year-old brother Brad is supposed to spend the night at his friend Daryl Coopersmith's house, but he changes his mind when he discovers that Chris is the sitter. After receiving a frantic phone call from Brenda, who ran away to a downtown bus station, Chris plans to go alone to pick her up, but is coerced by Brad, Sarah, and Daryl to take them with her. On the freeway, their station wagon suffers a flat tire and they are picked up by a tow truck driver, "Handsome" John Pruitt, who offers to pay for the tire when Chris realizes she left her purse at the Andersons'. En route, Pruitt receives a call from his boss Dawson with evidence that his wife is cheating on him, and he rushes to his house to confront the infidelity; Chris' mother's car is damaged when Pruitt accidentally shoots out the windshield while aiming to kill his wife's lover with his snubnosed revolver. Chris and the kids hide in the adulterer's Cadillac, which is then stolen by a car thief named Joe Gipp.