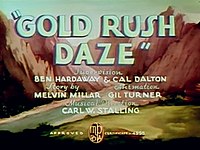 Gold Rush Daze is a 1939 Warner Bros. Merrie Melodies cartoon directed by Ben Hardaway and Cal Dalton. The short was released on February 25, 1939.

A dog-faced prospector drives to the hills to dig for gold. A local gas station attendant warns him that he is wasting his time, then goes on to tell the story of his own fruitless chase for gold; since 1849, he pursued strikes around the world and never had any success. The cartoon shows the attendant's various stops including the California Gold Rush, the Comstock Lode, and various other efforts globally that never (literally) pan out. Then, as the attendant finishes his story, a fellow rides up with news that there has indeed been gold found in the hills. The attendant steals the prospector's car to chase this rush, telling him he can have the gas station.