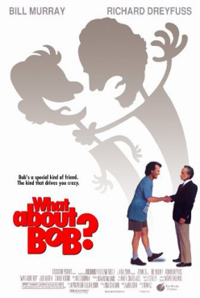 What About Bob? is a 1991 American comedy film directed by Frank Oz and starring Bill Murray and Richard Dreyfuss. Murray plays Bob Wiley, an irritating patient who follows his egotistical psychiatrist Dr. Leo Marvin (Dreyfuss) on vacation. When the unstable Bob befriends the other members of Dr. Leo's family, it pushes the doctor over the edge.

Bob Wiley has great work ethic and treats people well, but he suffers from multiple phobias which makes it difficult for him to leave his apartment and is divorced because his ex-wife likes Neil Diamond. Despite regular therapy, he makes little progress and his fears compel him to seek constant reassurance from his therapists.