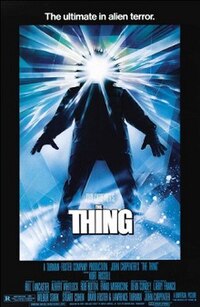 The Thing is a 1982 American science fiction horror film directed by John Carpenter and written by Bill Lancaster. Based on the 1938 John W. Campbell Jr. novella Who Goes There?, it tells the story of a group of American researchers in Antarctica who encounter the eponymous "Thing", a parasitic extraterrestrial life-form that assimilates, then imitates other organisms. The group is overcome by paranoia and conflict as they learn that they can no longer trust each other and that any one of them could be the Thing. The film stars Kurt Russell as the team's helicopter pilot, R.J. MacReady, and features A. Wilford Brimley, T. K. Carter, David Clennon, Keith David, Richard Dysart, Charles Hallahan, Peter Maloney, Richard Masur, Donald Moffat, Joel Polis, and Thomas G. Waites in supporting roles.

In Antarctica, a Norwegian helicopter pursues a sled dog to an American research station. The Americans witness the Norwegian passenger accidentally blow up the helicopter and himself. The Norwegian pilot fires a rifle and shouts at the Americans, but they cannot understand him and he is shot dead in self-defense by station commander Garry. The American helicopter pilot, R.J. MacReady, and Dr. Copper leave to investigate the Norwegian base. Among the charred ruins and frozen corpses, they find the burned remains of a malformed humanoid which they recover to the American station. Their biologist, Blair, performs autopsies on the remains and finds a normal set of human organs.