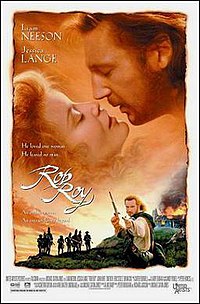 In Scotland, 1713, Robert Roy MacGregor is the Chief of Clan MacGregor. Although providing the Lowland gentry with protection against cattle rustling, he barely manages to feed his people. So hoping to alleviate their and his poverty, MacGregor borrows £1,000 from James Graham, Marquess of Montrose in order to establish himself as a cattle raiser and trader.