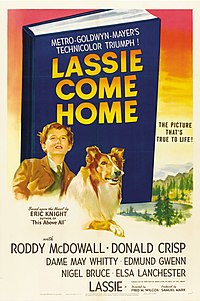 Lassie Come Home is a 1943 Metro-Goldwyn-Mayer Technicolor feature film starring Roddy McDowall and canine actor Pal, in a story about the profound bond between Yorkshire boy Joe Carraclough and his rough collie, Lassie. The film was directed by Fred M. Wilcox from a screenplay by Hugo Butler based upon the 1940 novel Lassie Come-Home by Eric Knight. The film was the first in a series of seven MGM films starring "Lassie."

Set in Depression-era Yorkshire, England, Mr and Mrs Carraclough are hit by hard times and forced to sell their collie, Lassie, to the rich Duke of Rudling, who has always admired her. Young Joe Carraclough grows despondent at the loss of his companion.