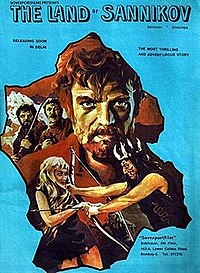 The Land of Sannikov is a Soviet 1974 adventure film about the fictional Sannikov Land loosely based on the novel of the same name by Vladimir Obruchev.

The exiled settler Alexander Ilyin persuades the gold mine owner Trifon Perfilyev to sponsor the expedition dedicated to the search for "Sannikov Land", a legendary warm land behind the polar circle. Hoping that this land could be filled with gold, Perfilyev agrees. A few more daredevils volunteer for the mission. The finally gathered crew consists of Ilyin himself, officer Evgeniy Krestovskiy, Perfilyev's servant Ignatiy, who is given a task of killing every other crew member in case they really find any gold, and Gubin, a Katorga runaway and a former doctor.