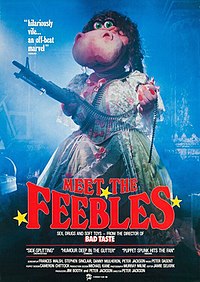 The eponymous Feeble Variety Hour theatre troupe is rehearsing the title song with hopes of finding success through being picked up for a syndicated television show. Heidi (a hippopotamus), the star of the show, is insulted by pornographic director Trevor (a rat) and complains to her boss and lover, Bletch (a walrus), who is actually in an adulterous relationship with Samantha (a cat). Meanwhile, Robert (a hedgehog), the newest member of the team, arrives at the theatre and immediately falls in love with another newcomer, Lucille (a poodle). Samantha confronts Heidi, insults her, and reveals her relationship with Bletch. Robert confesses his love to Lucille, and the two become engaged. Sid (an elephant) receives a visit from his ex-girlfriend Sandy (a chicken) with his alleged son Seymour (an improbable-looking elephant/chicken hybrid). Sandy informs him she will be preparing a paternity case against him.