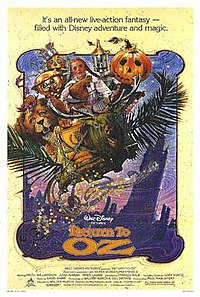 Return to Oz is a 1985 British-American dark fantasy film directed and written by Walter Murch, co-written by Gill Dennis and produced by Paul Maslansky. It stars Nicol Williamson, Jean Marsh, Piper Laurie, and Fairuza Balk as Dorothy Gale in her first screen role. The film is an unofficial sequel to the 1939 Metro-Goldwyn-Mayer film The Wizard of Oz, and is based on L. Frank Baum's early 20th century Oz novels, mainly The Marvelous Land of Oz (1904) and Ozma of Oz (1907). In the plot, Dorothy returns to the Land of Oz to find it has been overthrown by the villainous Nome King, and must restore it with her new friends Tik-Tok, Jack Pumpkinhead, and Princess Ozma.

In October 1899, Dorothy Gale still talks of her adventure in the Land of Oz, troubling her Aunt Em and Uncle Henry, who believe she is fantasizing. In her yard, she finds a key with an Oz insignia. Aunt Em takes her to Dr. J.B. Worley for electrotherapy, leaving her under the care of Nurse Wilson. As Dorothy is about to receive treatment, the asylum is struck by lightning and the power fails. Dorothy is freed from her restraints by a mysterious girl who tells her that Dr Worley's machines damage the patients. They escape, with Nurse Wilson in pursuit, and fall into a river. Dorothy clambers aboard a chicken coop, but the other girl vanishes.