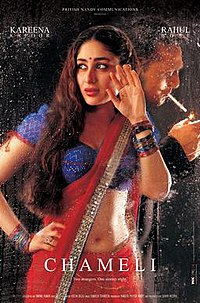 Chameli (Translation: "Jasmine") is a 2004 Indian Hindi film. It stars Kareena Kapoor and Rahul Bose, and was directed by Anant Balani, who died before the film was complete; after his death, Sudhir Mishra directed the movie.

Aman Kapoor (Rahul Bose) is a wealthy investment banker, whose pregnant wife, Neha (Rinke Khanna) was killed in a car accident more than a decade ago. The incident has left him depressed and lonely. Forced to engage in social events, he reluctantly hosts a party. The stormy weather puts Aman in a pensive mood, and he decides to go home. While driving, his car breaks down on a flooded road and his cell phone battery dies. He takes refuge in an alleyway where he meets Chameli (Kareena Kapoor), a street-smart prostitute.