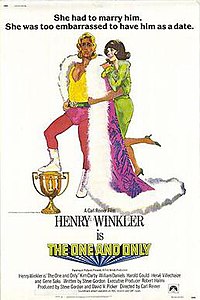 The One and Only is a 1978 comedy film starring Henry Winkler, directed by Carl Reiner and written by Steve Gordon.

At a midwestern college in 1951, student Mary Crawford has the combined good and bad fortune to meet Andy Schmidt, a remarkably conceited young man who is convinced that he is tremendously talented and has every intention of becoming a star. Andy wants Mary to marry him quickly before he becomes too famous to give her a second look. She cannot resist him and takes him home to Columbus, Ohio to meet her straitlaced parents. Andy proceeds to annoy Mary's parents by hugging them, calling them "Tom and Mom" and interrupting dinner to do a series of impressions, thoroughly ruining the visit.