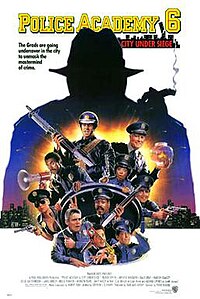 Police Academy 6: City Under Siege is a 1989 American comedy crime film starring Bubba Smith, David Graf and Michael Winslow. It was directed by Peter Bonerz and written by Stephen Curwick, based on characters created by Neal Israel and Pat Proft. The film was given a PG rating for violence and language. This was the fifth and last Police Academy sequel to be released in the year immediately following the previous installment of the series. It would take five years until the release of the following film, Police Academy: Mission to Moscow. Police Academy 6: City Under Siege was also the last movie in the series to feature Bubba Smith, Marion Ramsey, Bruce Mahler, Lance Kinsey and George R. Robertson as Hightower, Hooks, Fackler, Proctor and Commissioner Hurst respectively.

The police must investigate a series of robberies along the old 51 bus route in the area of the city known as Wilson Heights. The mayor (Kenneth Mars) assigns Captain Harris (G.W. Bailey) and Lt. Proctor (Lance Kinsey) to the case. While on stakeout the Wilson-Heights gang, composed of Ace (Gerrit Graham), Flash (Brian Seeman), and Ox (Darwyn Swalve), manages to elude capture. When the squad arrives and points out the fur store that was robbed, Proctor reveals he tried to tell Harris about it, but the latter would not listen. In his office, the mayor is furious with the latest crime spree and reprimands Harris for his precinct's slow response and Hurst for not being strict with the former. Despite arguing their case, he points out that because of their slow response, everyone thinks he is incompetent to do his job and are leaving town. Under threat by the governor with revocation of his job, the mayor orders Harris, Hurst and Proctor to work with Commandant Lassard (George Gaynes) to apprehend the gang. Lassard assembles a seven-man team consisting of Hightower (Bubba Smith), Tackleberry (David Graf), Jones (Michael Winslow), Hooks (Marion Ramsey), Callahan (Leslie Easterbrook), Fackler (Bruce Mahler), and Lassard's nephew, Nick (Matt McCoy).