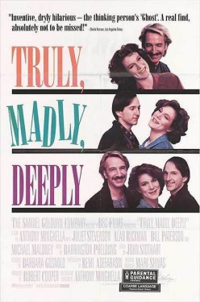 Nina, an interpreter, is beside herself with grief at the recent death of her boyfriend, Jamie, a cellist. When she is on the verge of despair, Jamie reappears as a "ghost" and the couple are reunited. Nina is ecstatic. But Jamie tells her about his days while she is at work, and one dialogue suggests she should embrace the life around her; one of these is about a memorial plaque in a park about a dead child and how parents who read it feel an immediate, compelling need to hug their children. The returned Jamie also reminds her that he also irritated her, and as a ghost he manifests behaviours she'd have little patience for – turning up the central heating to stifling levels, moving furniture around and inviting back "ghost friends" to watch videos. This infuriates her, and their relationship deteriorates.