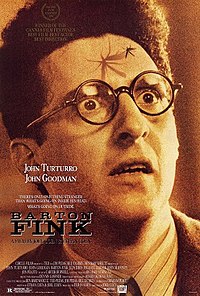 Barton Fink is a 1991 American period black comedy psychological thriller film written, produced, edited and directed by the Coen brothers. Set in 1941, it stars John Turturro in the title role as a young New York City playwright who is hired to write scripts for a film studio in Hollywood, and John Goodman as Charlie Meadows, the insurance salesman who lives next door at the run-down Hotel Earle.

In 1941, up-and-coming Broadway playwright Barton Fink (Turturro) accepts a contract from Capitol Pictures in Hollywood to write film scripts for a thousand dollars per week. Upon moving to Los Angeles, Fink settles into the cheap Hotel Earle. His room's only decoration is a small painting of a woman on the beach, arm raised to block the sun. Fink is assigned to a wrestling film by his new boss Jack Lipnick (Lerner), but he finds difficulty in writing for the unfamiliar subject. He is distracted by sounds coming from the room next door, and he phones the front desk to complain. His neighbor, Charlie Meadows (Goodman), is the source of the noise and visits Fink to apologize. As they talk, Fink proclaims his affection for "the common man", and Meadows describes his life as an insurance salesman.