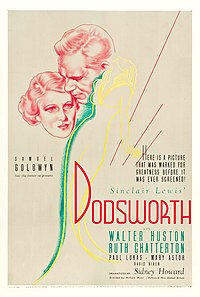 Dodsworth is a 1936 American drama film directed by William Wyler, and starring Walter Huston, Ruth Chatterton, Paul Lukas, and Mary Astor. Sidney Howard based the screenplay on his 1934 stage adaptation of the 1929 novel of the same name by Sinclair Lewis. Huston reprised his stage role.

In the small Midwestern city of Zenith, Samuel "Sam" Dodsworth (Walter Huston) is a successful, self-made man: the president of Dodsworth Motors, which he founded 20 years before. Then he sells the company to retire. Although Tubby Pearson, Sam's banker and friend, warns him that men like them are only happy when they are working, Sam has no plans beyond an extended trip to Europe with his wife Fran (Ruth Chatterton), who feels trapped by their dull small city social life.