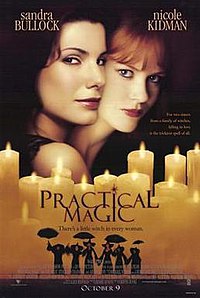 Practical Magic is a 1998 American romantic comedy fantasy film based on the 1995 novel of the same name by Alice Hoffman. The film was directed by Griffin Dunne and stars Sandra Bullock, Nicole Kidman, Stockard Channing, Dianne Wiest, Aidan Quinn, and Goran Višnjić.

Maria Owens, a young witch, is exiled to Maria's Island in Massachusetts with her unborn child for escaping her execution. When her lover does not come to rescue her, she desperately casts a spell upon herself to stop falling in love due to heartbreak, only to die soon after. The spell becomes a curse for several generations. In the present day, Gillian and Sally Owens, two descendants of the Owens family, are taken in by their aunts Frances and Jet after the death of their parents. Sally is the more gifted of the two while Gillian's talents are more in charm and persuasion, and have been subject to ridicule during their youth. After witnessing their aunts cast a spell on a man for a woman who seems obsessed with having his love, Gillian decides to fall in love and Sally casts a true love spell to protect herself.