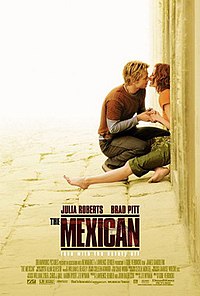 The Mexican is a 2001 American adventure comedy film directed by Gore Verbinski and starring Brad Pitt and Julia Roberts. Its plot is a mixture of different genres.

Five years earlier, Jerry crashes into the car of local mobster Arnold Margolese, who was arrested when the police searched his car following the crash, finding someone tied up in his trunk. In compensation for the jail time, Jerry has been sent on various errands by Margolese's prickly second-in-command, Bernie Nayman. Retrieving the gun will be his final errand. Jerry has a girlfriend, Samantha, with whom he argues constantly and who leaves Jerry prior to the trip over his lack of commitment to their relationship.