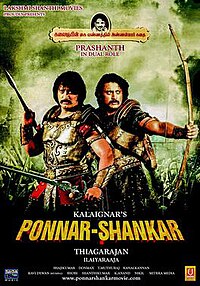 Ponnar Shankar is a 2011 Indian epic historical drama film produced and directed by Thiagarajan. It is a fictionalised account of the Ponnar Shankar epic, adapted from M. Karunanidhis novel of the same name. It features Thiagarajan's son Prashanth in lead dual roles as warrior princes, portraying the title characters, with actresses Pooja Chopra and Divya Parameshwaran making their film debut as princesses and Prakash Raj as the main antagonist. The film also features an extensive cast of supporting actors with Prabhu, Jayaram, Khushbu Sundar, Sneha, Vijayakumar, Nassar, Rajkiran, Napoleon, and Ponvannan, amongst others. The background score and soundtrack of the film, composed by Ilaiyaraaja, with cinematography handled by Shaji Kumar and editing done by Don Max.

A love affair between Thamarai Nachiyar (Kushboo) and her maternal cousin Nellian Kodan (Jayaram) is poorly received by their family, especially since he is not financially well off. Thamarai's father, King Periyamalai Kozhundhu Gounder (Vijayakumar), arranges for her marriage to Mandhiyappan (Prakash Raj), the ruler of a neighbouring country. Thamarai rejects the arranged marriage, angering Mandhiyappan. She later marries her lover, who had come to see her marry Mandhiyappan, and challenges her brother Chinnamalai Kozhundhu (Ponvannan) to marry his daughters off to her sons (the marriage of cousins is a gounder custom). Periyamalai Kozhundhu disowns his daughter for choosing Nellaiyankondan and banishes them from his kingdom.